In the XIX century in the Old World a plague called phylloxera destroyed the vineyards of the strain Carménère grape depriving the world of the exquisiteness of its wines. Prior the plague attack, some South American winemakers came to Europe to take away some grape seed for starting their own vineyards.

Chilean without knowing their fate took with them a few Carménère seed mixed with the Merlot seed. Carménère strain remained hidden mingling among the vineyards of Merlot for almost 130 years. It was not until 1994, nearly a century and a half later the loss of the strain in Europe, when in the vineyards of Viña Carmen, a scientist of the University of Montpellier, France, founded hidden the Carménère grapes.

This crucial moment for the history of the Chilean and global wine industry demarked the beginning of the production of exceptional wines from this grape, which was released five years after the reappearance of the loss strain.

From this moment the story of The Lost Grape arises.Honoring the beautiful story of the Carménère and the fact we are located in La Uvita -spanish for “Tiny Grape”- we named our lodge La Uvita Perdida, The Lost Tiny Grape.

In 2012 the founder and current owner of the lodge Uvita Perdida Mr. Luis Valverde decided to retire after being a University Professor for 30 years and returned to his birth town located in the south of Costa Rica. For his retirement he settled down in the mountain of Playa Hermosa due to the beauty of the forest and the splendor of the Pacific Ocean.

In 2013 he built his refuge. His house is surrounded by a mountain which has a little river, and is a biological corridor for cariblanco and congo monkeys, a variety of birds and butterflies, that cross the forest from one side to the other during the day.

By 2014 all the family and friends who had visited his house got delighted, so Mr. Valverde decided to build three cabins to share this magical place with nature lovers and tourists who want to admire the beauty of Costa Rica. Is the perfect place for those who like peace, tranquility and uncorking a bottle of wine while enjoying the sea view. His interest for wine began in the 80´s in an internship in France and became a passion after lived a couple of years in Chile , where he discovered the Carménère wine virtues- also known as the lost strain.

As expected, Mr. Valverde has collected little wine cellar in a special spot in the Uvita Perdida, where eventually he shares a glass of wine with his guests for welcoming them to this magical lodge. When we asked Mr. Valverde what was the most important feature of the guest attention in the Uvita Perdida, he answered: “From the moment the guests arrive we serve them with the purpose for them to want to come back soon”.

More about what can you do in the area 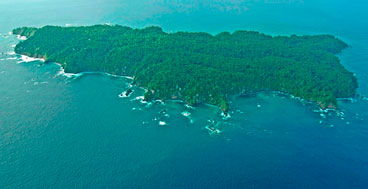 This biological reserve is 20 km away from Península de Osa. It has an important archeological value due to the fact that it was a native cemetery and the presence of native art (stone spheres). Diving is highly recommended because the main natural attraction is the coral reef and the sea fauna. 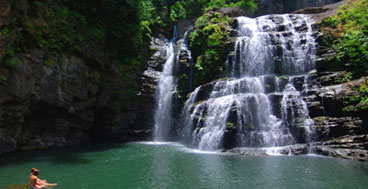 25 km away from La Uvita Perdida on the way to San Isidro del General.
The tour begins with a 6km horseback riding through the Líbano tropical forest reaching a 40 meter high waterfall where you can swim in an ample secure pond, all this after a delicious Costa Rican breakfast.

40 km away from our lodge. It is the most visited national park in Costa Rica. There are gorgeous beaches surrounded by primary forest with an outstanding biodiversity variety making this national park a must during your stay at La Uvita Perdida. 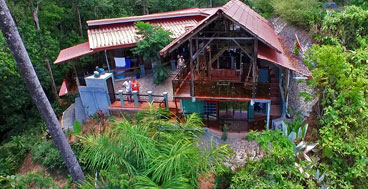 Visit a great variety of beaches where you can enjoy of the sea and the gastronomy and entertainment options.

Your comfort is our main objective, you just need to relax and enjoy the Costa Rican tropical environment.

Away from the city you will live the real meaning of relaxation and many things which are going to make of your visit to our Lodge a really unique and unforgettable experience.